Two hikers found me after I passed out 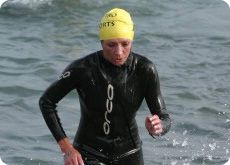 This past summer, my Road ID literally saved my life.  I was in Northern Michigan, taking care of my father who was dying from melanoma.  I'm a marathon runner, but lately I was not training properly and became concerned about my safety and health during long runs.  I decided to order a Wrist ID for myself, and one for my father.

Later that summer I decided to run a 1/2 Marathon.  About halfway through, I wasn't feeling well and decided to cut out and run home.  I headed towards a two-mile long "short-cut" though a wooded area, and the last thing I remember is looking at the pavement and everything went black.

Next thing I know, I'm waking up in an ambulance.  As it turns out, two hikers had found me after I passed out. The EMTs used my Road ID to call my mother.  I had purposefully put directions to call only my mom's cell phone, due to my dad's condition.  I can only imagine if I had not been wearing that band, I would have ended up in the ER as a Jane Doe.

Thank you again for being a life-saver.  I never run a day without wearing my 'pink band of honor'!  I forever run in honor and memory of my wonderful dad.