My Road ID saved the day 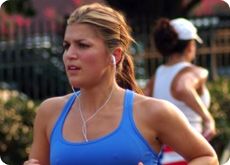 I purchased my Road ID when I started training for the Chicago Marathon.  I, like many others, never thought I would ever need to use my Road ID.  The day I lined up to run the Chicago Marathon, it was very hot and humid, 88 degree heat, but I still believed I could accomplish my goal; to qualify for the Boston Marathon.

I was in mile 19 when I suffered a major heat stroke and passed out.  I don’t remember too much about what happened, but the medical staff quickly noticed my ROAD ID that I was wearing on my wrist and called my husband(he was my boyfriend then).  Matt arrived at the medical tent just as I was being loaded in the ambulance.

Later, while still in the hospital, I was told that the race had been cancelled at mile 16 and 6500 runners were forced to end their marathon. Hundreds of runners were being transported to different hospitals located close to the race route.  The hospitals were taken by surprise and many runners were not as successful as I was in tracking down family members.

The Chicago Marathon of 2007 was a chaotic scene, and I have to say that my Road ID saved the day.

Two months later on a cool day in Memphis I qualified for the Boston Marathon.  As I lined up in Hopkington, my thoughts flashed back to that day in Chicago.  Moments later, the gun went off and I began the greatest road race I had ever run.  My watch was on my left wrist and my Road ID was on my right wrist.  I was on the road to Boylston Street to compete the journey.

Thanks Road ID for developing such a unique product; a product that saves critical moments in the midst of a crisis.