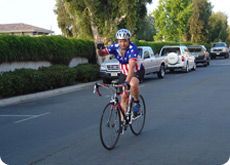 July 27th is a day that will remain with me forever. I was training for an upcoming century that morning and set out with a friend to do a 48 miler. 18 miles into the trip things went very wrong. We had just climbed a small hill, and decided to rest. Once we rehydrated, it was time to start the 6 mile downhill. I took off and told my friend that I would see him at the bottom. On the way down there were a series of curves in the road and on one of them a car decided to pass me. I thought it was close, so I tried to move to the right. The next thing I remember was being in a Helicopter headed for the Trauma Center.

A few months before the accident, I saw your ad for Road ID and thought that I should have one, so I ordered the Ankle ID. What a smart move that proved to be. I was not able to speak for myself, but the paramedics had all the information that they needed from my Road ID. They quickly took action which saved my life.

My injuries included 2 punctured lungs, seven broken ribs, a broken collar bone, several broken bones in my face, and road rash all down my right side. I spent 3 days in the trauma center followed by another 8 days in the hospital.

Your ads don't say enough. Road ID truly is a lifesaver. What a concept. This is a 'no brainer' for anyone who wants peace of mind. I had my wife's name and phone number on my Road ID. As a result, the hospital was able to call her to tell her I was fine and where I was. You guys think of everything. I hope my little story helps someone else make that decision to buy one of your lifesaving items. You're the greatest and thanks again.