Luckily, I was wearing my Road ID 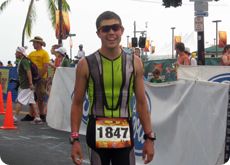 On this now unforgettable day, I decided to go on a bike ride.  This was going to be a really tough ride because I was training for the Ironman World Championships in Kona, Hawaii.  I would have never suspected that this would be my last bike ride for the next couple of weeks.  Coming back into town I was hit by a car that turned in front of me.  It was a pretty ugly crash...I flew over the front end of the car and rolled several times on the ground.

The person that came to my rescue was able to immediately contact my parents, after calling for an ambulance, because I was wearing a Road ID.  When the police arrived, my Road ID also provided them with all the information they needed.  In looking back, had it not been for my Road ID my family may not have found out about my accident until hours later.

Update:  I am lucky to say that I had no permanent damage from the crash and was able to heal in time for the Ironman.  I was able to finish the Ironman before the cut-off time, even with my injuries.  Hopefully next time I decide to do an Ironman I won't get hit by a car, but if I do at least I'll have my Road ID on me!