I was thrown 27 feet and fell unconscious 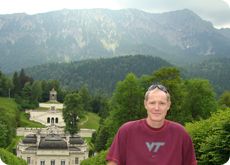 About a month ago I took my bike out for a training ride. I was on the wide shoulder of a rural road in the middle of the day.  To look at it, you would think it was the safest road in the world for bikes, yet, I was struck by a car...the driver was not paying attention.  I was thrown 27 feet, landing in the middle of the road.  I tried to crawl to safety, but fell unconscious.  The next thing I remember was being loaded onto a Maryland State Police Medivac helicopter and then flown to the regional trauma center.

The only ID I had on me was my Road ID bracelet.  It contained the vitals necessary for the EMTs to know who I was, who to contact and other critical info to help save my life.  Every lifesaver involved commented about how smart I was to have this ID and how much it helped.  Otherwise, they said, I would have been a "Brendan Doe" (living version of John Doe). Without this ID, it could have been hours or longer before my family would have known where I was or what happened.

I had a concussion, three badly broken ribs and a collapsed lung.  I spent 5 days in the hospital and never took off my Road ID.  Since then, I've been telling everyone about Road ID, and I think everyone should get one!  There is no such thing as a "safe" road or trail.  Don't leave home without a Road ID!