I wanted to ensure my family could be contacted... 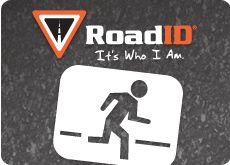 I have been a State Trooper for more than 25 years. All too often, when responding to a serious traffic accident or medical emergency, contacting family members is problematic and time-consuming. As I began to increase my running in recent years, I wanted to ensure others could contact my family in the event of an emergency, so I ordered a Road ID and wear it on every run.

Last year my mother had a serious medical issue, collapsing in a parking lot with no identification. Police officers and medics on the scene were able to provide CPR and revive her. I was notified by a neighbor because of a rumor that my mother had collapsed at a nearby store. I called local hospitals and only then did I know where she was.

After time in the hospital, she was able to move into a supported living facility where she had her own apartment and daily support. Her name is Violet so I ordered her a purple Road ID, which she wore daily. Not too long after the initial incident, I received a difficult phone call; Mom had collapsed and could not be revived. When I arrived, she was wearing her Road ID. My sister now wears it daily in her memory.

I have since ordered one for my widowed mother-in-law, Judi, who has some health concerns. Neither Violet nor Judi were ever runners, but in any case, Road ID has served us well as a readily-available resource for contact information, and in providing peace of mind for family members.