He flew over the handle bars into the Road 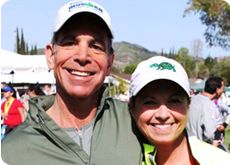 My boyfriend, a triathlete, was on a bike ride when a motorhome made an illegal left turn in front of him. Douglas was traveling downhill between 35-45 mph. He is a good bike handler and was able to avoid hitting the motorhome. However, he braked so hard that he went over the handle bars and landed in the middle of the road.A park ranger in his truck saw the whole thing and called 911. Douglas was unconscious for quite a while. In fact, he has no recollection of the accident or how he got into the helicopter. He was airlifted to the UCLA trauma center. The paramedics saw his Road ID, which he always wears when he's biking or running, and were able to both identify him and get a hold of me. UCLA trauma center used his Road ID to call me and give me an update as to his condition prior to my arrival.

He sustained a dislocated left shoulder, a fractured right elbow, a compression fracture of T7, 16 stitches in his jaw, and lots of road rash. It will be a while before he can race again but the accident could have been so much worse. I just want you to know how thankful we are for Road ID.  Without it, Douglas would not have been identified for a very long time and no one would have known how to contact me.