First responders found him in unable to speak... 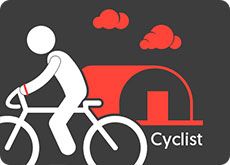 A few years ago we gave a Road ID to my brother-in-law. He crashed his bike last June, suffering 8 broken ribs, broken collar bone, broken pelvis, broken scapula, cracked transverse process, skull cracked in three areas. He had his cell phone with him, but it had flown into the bushes and was not  found until a few days later. First responders found him in unable to speak for himself. The only ID they could could find was, you guessed it, his Road ID bracelet. They used the info on his ID to contact his wife, my sister.