There was no time to react... 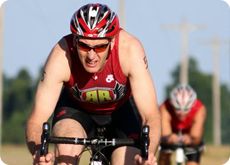 Both my husband, Terry, and I wear our Road IDs all the time. While training, a few weeks before a race, he and three friends went out to do a ride/run brick.  As they were leaving thee starting point, a dog was running alongside him and suddenly cut in front of him.  It hit his front tire and there was no time to react. Terry went down, hard.  He got up, dusted himself off, swabbed up the blood and thought he had just had the wind knocked out of him.  He assured the friends that he was fine and went on to ride 56 miles.

Two miles into the run portion, he called me and said he thought he might need to go to the ER because he was having trouble breathing, then informed me he'd had a wreck.  Turns out he broke one of his ribs and punctured a lung as well as had a ton of road rash. Needless to say, since that's what could happen with friends it does concern me what could happen when he is by himself.

Thank you so much for making this available to people.  I will feel so much better knowing he is training much more safely now with the Road ID app. We are forever loyal Road ID customers.