The right help at the right time! 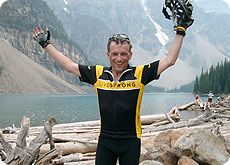 That Saturday, I was out bicycling as usual. I had just received my Road ID, having ordered it online after receiving a flyer about Road ID at a bicycle event. This was the third time I wore it. I am very happy that I did.  I rode out to a distant suburb, riding for about 90 minutes. The ambulance report says as much as is known, which is "Male found unconscious on road near bicycle."

Something apparently hit me from the right, fracturing my right arm and right leg into a few pieces. I only remember bicycling in a marked bicycle lane, then looking up at the ceiling of an ambulance, then being prepared for surgery in the trauma center.

Fortunately, I had placed my name, home phone number, physician's name and phone numbers on my Road ID, which I wore around my neck under my bicycling jersey. Because the ambulance personnel knew who to call, by the time the ambulance arrived at the trauma center my family was already there and the trauma center surgeon had already found and spoken with my doctor. All of which obviously helped. Now, following insertion of rods, a plate and 11 screws, a month in a wheelchair, and still using a cane, I can't say how grateful I am that I received the Road ID advertisement and acted on it. A lasting memory is of a ceremony in the hospital after the surgery. Two of the nurses came into my room and presented me with my Road ID, telling me I was smart to have had it. I'm going to keep that Road ID forever as a good luck charm. Good luck, because it helped get me the right help at the right time.

Ambulance personnel later told me that they are trained to look for ID's on unconscious patients, but too often do not find any ID at all. I am not an athlete, just a 54-year-old regular person. I never thought I would be found unconscious on a street, unable to identify myself. But life is full of unplanned events, and my unplanned event proved it makes good sense to wear a Road ID. I am very grateful that Road ID brochures were distributed this summer at one of our local bicycle events.

- Steve .R from Portland, OR