The hospital knew me only as Jane Doe 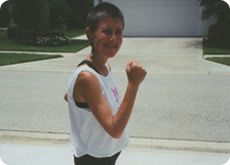 Nothing was unusual about that morning. At 5am I donned my running clothes and took off for my daily morning jog before leaving for work. Not far from home I tripped over my own foot and fell forward onto the pavement. I was lying on the side of the road conscious, but unable to move, speak or breathe well. A passerby called 911 and I was admitted to a local hospital as a Jane Doe. For 9 hours I was lying in an ER, unable to be identified and unable to tell others any information about myself.

Nine hours later, my co-workers found me at the hospital and recognized that I could communicate by blinking my eyes (something the ER staff did not notice.) They wrote numbers on a piece of paper and I blinked my eyes when they pointed to the numbers that created my family's phone number.

As a healthy person, I felt that emergencies would not happen to me. I was wrong. During my recovery I learned a lot about the fragility of life and about the importance of personal identification. As I continue to grow and change, I will never, ever leave home without ID.I am now aware of the unpredictable nature of life.