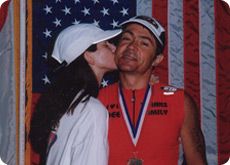 My story begins and ends on Saturday, June 29th, 2002. That morning I drove my husband, Rod (pictured right), to the Vilano Bridge in St. Augustine to bike back to our home in Jacksonville, a trek of 40 miles. He was training for the world championship long-course triathlon in Nice, France later this year. I wasn't surprisedwhen he returned home and wanted to go for a run (this is commonly known as a "brick" workout).

Rod never returned from his run. I searched for him for hours. It took me calling all the hospitals and police departments to find him. Only then did I learn that Rod had collapsed on Selva Marina Drive in Atlantic Beach - just one-half mile into his run - just one-half mile from our home. He died, unexpectedly, from heart failure at age 43.

Rod was not wearing ID and it haunts me to know that he was a "John Doe" at the hospital. I am still numb over the loss of my husband. I needed to be with him at the time of the accident, but no one knew who he was or how to contact me. Also disturbing is the fact that he had deliberately updated his drivers license so he could be an organ donor. Because he was a "John Doe" in the ER, they could not look him up in the donor database and his wish to be a donor was unfulfilled.

I hope others learn from my husband's death the importance of carrying identification when training. I don't think ID would have saved Rod's life, but it might save someone else's - especially if you need to list certain medications or allergies. I now consider myself on a mini crusade to get my friends and others to take ID seriously.