Paramedics accessed the data on my Road ID 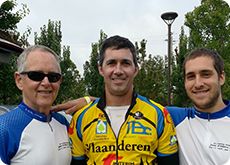 This past year, I was participating in the Marin Century with my son and grandson. About halfway through the ride, I was cut off by another cyclist and went down hard. Along with a broken clavicle, I sustained a very serious concussion, as I was unconscious for about 5 minutes (I was told), and I ultimately spent two weeks in the hospital -- neither of which I remember! At the scene of the accident, paramedics accessed the data on my Road ID, and it was accessed again at the hospital and in the Emergency Room.

My doctor thought I would need at least six months to recover before I could drive, let alone ride. Exactly two months after the accident, however, I was driving and back on my bike. Less than a week after that, I was back doing 20+ mile training rides.

I am a huge proponent of Road ID! My gratitude to all of you for providing a very valuable asset!