My wife was able to know exactly where I was 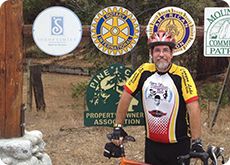 This past Memorial Day, I went on what was scheduled to be a 20-30 mile ride. About a mile in, I had a crash. From what I remember, I was riding, and the next thing I know, I was on the road in pain with several people around me. The next thing I recall is being put into an ambulance, and then waking up in the emergency room being taken for a CT scan.

At the scene, I simply pointed to the Road ID on my wrist and said “wife”. My wife tells me she received a call from a stranger telling her I had crashed. She was able to make it to the scene and talk to the ambulance driver, where they told her which hospital I was being taken to. I am so thankful I had my Road ID with me. My wife was able to know exactly where I was and I was never alone at the hospital wondering.

I ended up with a concussion, three broken ribs, a punctured lung, a strained groin muscle, and road rash on shoulder, elbow, hip and knee. The accident was believed to be caused by an excessively deep pothole. I just got home tonight from the hospital and will be recovering for 6-8 weeks.