Our Golden Retriever was hit by a cyclist! 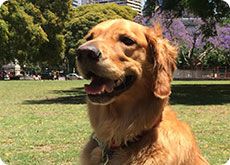 Earlier this year, my wife and I transferred to Buenos Aires, Argentina. bringing our Golden Retriever, Stella, with us. I elected to get her a new Scout ID with our updated cell numbers and her Microchip info. About a week later, she was hit by a cyclist while we were walking around the city at night. She got off the leashand took off running out of fear. We searched all night, and spoke with numerous people who said they saw here running down the middle of a four lane road. At 8am the next morning, I received a call on my cell phone from someone who had located Stella, saying she appeared to be lost and injured. We got to her in less than an hour and took her straight to the vet.

She ended up having a collapsed lung - 1 liter of air was removed from her right lung and 150 mL of air from her left - due to the bike hitting her and from running for five or six miles out of fear. She was given good care and is expected to make it.

I want to personally thank Road ID for not only a great product, but fast service, and your dedication to the Law Enforcement and First Responder community. If Stella had not been wearing her Scout ID, we would still be looking for her and she would likely have passed away from her injuries. You saved the most important member of our family, and we are forever grateful.