Not one, but TWO dogs chased me on my bike! 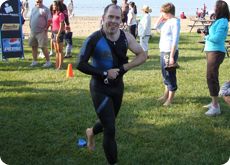 I was out on a 100km ride the other day, when I was forced to take a detour; the road I planned to ride was covered in gravel.  As I continued on my revised route, I was chased by not one, but TWO dogs!  Strangely, they were separate incidents that happened about 2km apart.  I managed to escape the first one without any trouble.  However, as I tried to evade the second dog I hit a patch of gravel and crashed to the ground.

The next thing I can remember is lying on the ground in severe pain, unable to move.  I hit my head pretty hard- it split my helmet- and I cried out for help.  While I was seemingly in the middle of nowhere, a couple heard me, jumped into their small SUV and came to my rescue.

As I laid there on my side in agony, I told them to get my info off my Road ID.  After phoning 911 they called my wife, who was just a little upset, to say the least.

The paramedics put me on a board, put a neck brace on me and transported me to the hospital.  Thanks to my Road ID, they were able to verify my information on the way, and my wife arrived at the hospital shortly after me.  I had a couple of suspected fractured ribs, lots of bruising and road rash.

My accident makes me realize that you never know what could happen around the next corner.  I will ALWAYS wear my Road ID.  It’s who I Am...Husband, Father, Air Traffic Controller, Triathlete.