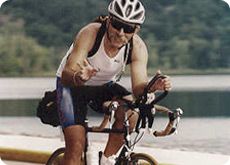 7 years ago, I was riding out to a small town 7 miles west of where I live. The roads here are, in many respects, awesome to ride on - most are lightly traveled. Muscoda is a small town in Southwest Wisconsin - its right on the Wisconsin river in an area known as the "driftless area." Anyway, Hwy 133 is a 4 mile stretch thatcannot be avoided. It's busy at times - no shoulder - very poor pavement. I was riding west one morning when I was hit from behind by a car going 55 - the woman driving said she thought I was a deer - something that is very common here. The rescue squad that responded was one that I was a volunteer with. The crew said they knew it was me when the call came in. Overall, I was very lucky - I bounce really well for my age group. Other than some bumps and bruises. nothing really major needed fixing.

I did, however, take the passengers side mirror off with my left butt cheek. The bruise that it left was interesting to say the least. And, because I did hit the pavement on my backside - I suffered a mean case of road rash - having it there is something you have to experience to believe. But, I was riding again within a week.

Well, last August I was headed east on the same road - about a mile from where I was hit the first time. Again, I was hit from behind by a car doing 55. This time, I was flipped over the car - landing on the trunk deck. Again, the rescue squad was called - this time from the town just down the road - and yes - they knew it was me when the call came in. And again, I bounced really well. After many Xrays, poking, and prodding I was released with nothing more than bumps and bruises. Yes - I am lucky!!!!!!!!

The kicker here is that both times it was the same person - I am not kidding here - the same woman driving. I do not even know her. The chances of that are - well - I am a math teacher and to be honest, I don't think they have numbers we can understand that describe it.

Your product is an excellent idea.