I woke up in an ambulance... 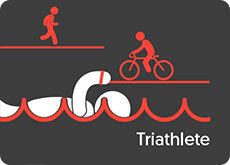 I was riding my bike on a little Island with a 5 mile loop which is great for speed training and running as well. Lots of cyclist and runners use this area for training. 2 weeks before I was going to do Ironman Arizona 140.6 I got in an accident. Another cyclist came up on me to say hello as I was in aero going about 30 mph, and he lost control hit me and I went flying. I landed on my right shoulder and head.The last thing I remember was someone asking my name before I passed out. I lifted my left arm where my Road ID was located. I woke up in an ambulance with the gentleman that asked me if I was OK. He said he called 911, my wife who was listed on my RoadID and my father who is a Doctor in San Diego who was also listed on my Road ID. The ambulance was going to take me to a different hospital but when the man got my father on the phone he said bring me to his hospital. So the Emergency crew did just that.My wife was 7 1/2 months pregnant at the time but the gentleman that called her about the accident stayed in contact with her via phone calls to let her know I was okay so she didn't go into early labor.

I was diagnosed with a minor concussion and a 2nd degree shoulder separation. 2 weeks later when Ironman Arizona came up I still participated with one working arm and still crossed the finish Line.Thank you for the ability to keep my wife in the loop and also if it weren't for the RoadID I would've been taken to the wrong hospital.