I wish I was wearing an ID that day! 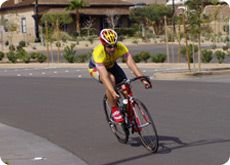 I race Pro 1, 2 Road and Semi-Pro MTB with the Viejas/Vo2 Racing Team. In July, I was on a training ride on highway 52 (in the bike lane) when things went terribly wrong. A motorist was speeding through traffic and decided to pass a slow moving semi-truck by using the Safety/Bike Lane. The car hit me going an estimated 75 mph. I was thrown into the air 25 feet and landed on the Highway where traffic slowed - trying to avoid my body. Fortunately, the Copter1 fire rescue helicopter was only seconds away. Later they told me that I had no vital signs and was not breathing when they arrived.

My first memory, after the accident, is waking up in the hospital, 10 days later, and being so happy to be alive. The doctors told me I was very lucky. I remember my girlfriend, Kristin, telling me what happen, and how nobody knew who I was and the ER doctors couldn't notify my family to get my medical history.

In looking back, I wish I had been wearing ID that day. I want to share my story with others so they can understand how important it is for active people to wear ID. I lived for some reason, and if my story makes a difference for one other life, then I have that reason for living.

I suffered a fractured skull, three bleeds on the brain, and many other injuries. I could not have prevented this accident from happening, but I could have prevented being air lifted to the hospital as an unidentified victim. I will always wish that ID had been a part of my athletic gear. I have recovered amazingly well and am back on my bike. I will never ride again without ID, and I am happy to report that all the riders on my Cycling team are now wearing Road IDs. It's better to have a Road ID and not need it, than to need a Road ID and not have it.