I was there with him as soon as possible 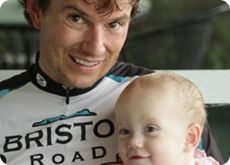 This past year, my husband became the poster child for your product.

We were vacationing as a family at the beach, when Tom went out for a long bike ride. As an avid cyclist, he's extraordinarily safety conscious, and even has taught safe commuting practices through workshops in Baltimore. As such, on this particular day he was, of course, wearing his helmet, had lights flashing on this bike, and was also wearing his Road ID.

But someone hit him anyway.

Someone crossed over into the shoulder, over the rumble strips, and hit him. Hard. He was thrown 35 feet into the woods and terribly injured. The person who hit him did not stop. State troopers responding to the crash scene found Tom's Road ID and were able to contact me.

That phone call turn my life upside down, but had it not been for your product, it would have been hours before I would have known what had happened. Instead, I was notified within minutes of their discovery of his Road ID. A state trooper drove my minivan with me and my three young children the two-hour drive to the hospital where he had been life-flighted.

We were in a strange hospital in an unfamiliar state, but I was there with him as soon as possible. Had they not known how to contact me, he would've been alone, injured, and bewildered for many hours.


- Blair .B from Baltimore, MD