I used my ID twice… in the same day! 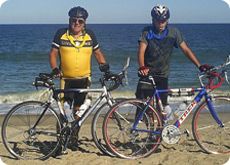 I’m an avid roadie and a retired U.S. Army officer. In late September I was doing a century ride with about 1,000 other riders. This was a ride, not a race. But you know how competitive experienced roadies can be. Well, the leaders were about eight minutes ahead of the first chase group of abouteighteen experienced riders. We were riding around twenty-five miles per hour. I was third in the trail, preparing to take my turn breaking the wind when the lead rider hit a three inch by two inch, wagon cut, rut in the road. Everything happened so fast. Down he went. The second rider, twelve inches behind his rear wheel went down. The leader was beside me falling back to the rear of the trail. As I went down I took her with me. I was told later that I not only took out the rider beside me, but three more behind me.

To this day I do not remember hitting the ground. They said I bounced three times like a smooth rock skipping on a smooth lake surface, rolled several times and lay still. They thought I was dead.

Guess what? I was wearing my Road ID. The EMTs and hospital emergency room staff had all the information they needed. After full body MRIs, X-rays, blood tests and every other test you can imagine, the doctors concluded that all I had was a severe concussion, three broken ribs and the best looking road rash from the left side of my face to my thigh that you ever saw. Other than that, I was declared fit for release from the ER.

Still in my riding shirt and shorts, I was taken back to my car and I began the 40 mile drive home without taking any of the pain medication they gave me at the hospital. I know now that I should not have tried to drive myself home. About 10 miles from home I began to feel very faint and knew I was about to pass out. I pulled over to the shoulder of the road and lay down on the front seat of my car. Suddenly there was a knock on the window glass. A County Police Officer had stopped to investigate. Rather unstable and somewhat incoherent I tried, unsuccessfully, to answer the officer’s questions. Then he noticed my RoadID dog tag and notified my wife. During the ambulance ride to the second hospital of the day, the EMT’s were asking me questions that I was unable to comprehend. I pointed to my RoadID dog tag. I heard one of them say something to the effect that this was the best idea he had ever seen.

Some three months later the road rash is gone. Two of the three broken ribs have healed. The third only bothers me when I lay on it. My left elbow and hip seem to have a slight deformity. My bike has been repaired. I have a new helmet. I’m riding my rollers in the garage.

I will never be without my Road ID. I don’t care whether I’m riding my bike, casually walking a trail, or driving in my car. Those dog tags are the most visible identity items that emergency professionals easily locate. In fact, I have ordered a set for my two grandsons that often accompany me on long rides. Thanks Road ID. You are truly life savers.