I’m so glad I gave my brother a Road ID! 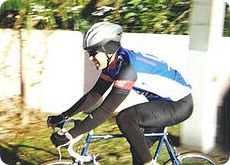 This past Christmas I gave my two brothers, who are also riders, Road ID gift certificates.  I previously bought one for myself and thought it was a great idea...especially since we don't carry ID or our wallets when we ride.  Last Sunday, my brother was in a group ride and a rider fell behind him.  He stopped and rode around to check on the fallen rider. In the chaos his front wheel slipped while trying to hop on the sidewalk.

He went down hard.

As soon as he hit the sidewalk, he knew he had a fracture.  He waited for more than 20 minutes for Fire/Rescue to show, laying on the ground and not moving at all.

When Fire/Rescue arrived, he was conscious, but handed them his Road ID so that they could contact his family.  When I went to see him at the hospital later that day, he told me about how his Road ID was helpful.  He also imformed me that he lost track of his ID after he handed it to the medics.

Considering the type of fall, my brother's injuries were pretty serious. Javi experienced a compound fracture of his right radius and a dislocated elbow.  The surgeon was able to set the elbow, but the arm required a plate and screws to immobilize it.

It's funny, even though Javi was in pain and had a huge temporary cast on his arm, he was still concerned that his bib shorts would get damaged during surgery prep.  So my other brother and I borrowed some scissors, cut his jersey and undershirt and were able to slip off his bibs without a scratch.  Then, we dressed him in the fashionable hospital gown.  When I reached to get the gown from behind the bed, what did I find?  His Road ID.

In his words: I'll never ride without it!