I know so much about my friend, but not vital info 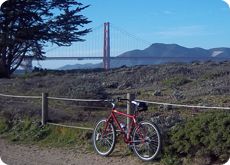 My friend Michelle joined me for a 'San Francisco Bike Party'...a fun ride with hundreds of people through the streets of San Francisco.  It was a flat route with just one fairly steep climb and descent...that's where things got different, really fast. Michelle got ahead of me on the downhill. She looked completely in control but was going very fast.  A few seconds later, I came around a curve on the descent, and 2 riders were down on the road. One was Michelle. Her helmet, glasses and bike were off to the side...scattered.

It seemed like forever, but just a few minutes later the ambulance and fire engine arrived.  The EMTs were assessing Michelle and transporting her into the ambulance while I was gathering up her things and talking to the police and firemen.

The information I was able to provide to them- phone number, age, where her parents live, her profession- was not really want they wanted.  They wanted her vital information, which I couldn't provide.  However, Michelle was wearing her Road ID... I was able to tell them that her contact information could be found right on her wrist.

A couple of things struck me as we sat in the ER. We ride together...know each other's favorite teams, riders...so many things, yet not that vital information. I saw with my own eyes, that information gets scattered.  Her bike and seat bag had been tossed off to the side; her backpack was in my car some 4 miles away.

I thought that since I carry ID in my seat bag, I was covered.  Well my seat bag would have been tossed to one side like Michelle's was.  I also ride alone a lot. From what I saw, if your ID or info isn't with you, it won't catch up to you until possibly hours later.

Please, for the sake of your health and for the sake of the people who ride with you:
1) Wear a good helmet. Always! Michelle's broke in a few places and saved her life.
2) Wear some sort of ID that stays securely attached to you, your body in particular.