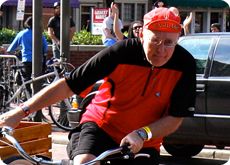 The other weekend I was participating in a community bike event, and I was entered into the tricycle race. While in the lead, something broke, sending me off course. I ran straight into the back of the van at about 15mph (with no helmet). It put a sizable dent in the back door of the van, and I found myself on the ground with a massive knot on my head. When the paramedics arrived, they started asking questions...I merely raised my arm to show them my Road ID. The medics thought Road IDs were one of the best thing invented. One guy even said he had three of his own.

I'm going to be fine, but it turns out the trike was totaled as a result of the accident. It bent the frame! While I didn't finish the race, they did name the trophy after me.

- Oran .S from Indianapolis, IN