Because I was wearing my Road ID... 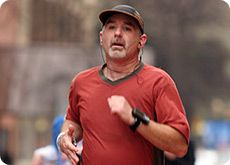 Thank you Road ID for allowing my family to be notified of my accident within minutes of my injury, rather than hours. This allowed the medical team to get valuable and timely medical history - which aided them in doing such a wonderful job on my medical care.Here’s my story:  I had seen numerous ads in for the Road ID in running magazines.  I finally decided to get one for my father and me as a Christmas gift. Both Road IDs carry the same scripture reference: Isaiah 40:31.  My father is 73 and runs 6 days a week with the Enid Running Club in Enid Oklahoma.

A few weeks after Christmas, I was in training for the Austin Half Marathon. I had started running in a neighborhood behind my childrens’ school because it was flatter and the streets were less traveled.  My plan was to run for an hour, and be back in time to pick up my son from basketball practice.

My next lucid memory, 16 days later, was my father leaning over my hospital bed telling me I had been hit by a truck while running!  We determined that a truck ran a stop sign, hit me, ran over me, and dragged me down the street. The driver did not stop and I was left in the middle of a very busy thoroughfare.  It took the EMTs only 7 minutes to get to me.  I was in such bad shape that they simply put me on a board and started for the hospital.

My injuries were extensive - broken neck, back, shoulder blade, pelvis, 20 fractured ribs, punctured lung, and numerous damaged ligaments.  I received 11 units of blood the first night, had major organ failure, and was revived at least once. I was in ICU for 19 days and have pins and screws in my back and pelvis, but am thrilled to say that I left the hospital for home on February 22.  My rehab is going well, I am now walking on both legs (with a walker), have begun working from home, and hope to be brace free within a month.  I give God the credit for my recovery and the how in spite of my injuries, none are permanent.