The fireman was wearing one too 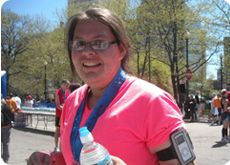 I am from Rhode Island, which is commonly known as being the smallest of the states. Well, it's also known for having some of the worst roads. I was out running one day, and I came around a corner a bit too fast. I slipped on some sand (which can often be as slippery and dangerous as ice). The next thing I know I am layingin the middle of the street. My knee had somehow popped out of place and the pain was intense -- I couldn't straighten my leg, or even stand up.

When I fell, I dropped my cell phone and it was nowhere to be found. A car came around the corner and asked if I was all right -- they immediately called 911. It seemed like I waited for forever. Apparently the paramedics had taken a wrong turn and gotten lost. At this point, when the medics finally arrived, the intense pain had rendered me nearly speechless.

A medic found my phone on the ground and started to search through my contacts to find someone who he could contact and let know about my situation. Instead, I removed my Road ID and handed it to him. He had never seen one before, but a nearby fireman overheard us, and said "Road ID… a crucial piece of running gear that everyone should wear." The fireman then pulled up his sleeve, revealing that he was wearing one too! The medics were able to contact my parents who were waiting for me at the hospital when I arrived. Thank goodness I was wearing my Road ID!

Thank you for such a great product!