No one plans to have an emergency 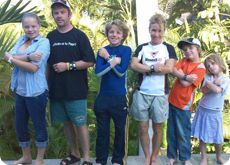 After dropping my four kids off at school one morning, I started on a long bike ride.  It was my last training ride before I was to leave for the ITU World Championships in Hamburg, Germany.  Toward the end of the ride I was struck by a motor vehicle.  I was unconscious for about 5 minutes. When I came to, somehow I knew it was time to pick up my youngest from preschool, but I was confused and unable to provide the correct phone numbers to those around me.  My Road ID on my ankle solved everything... my husband was contacted immediately, as was my daughter's school.  It also made the process of getting hospital treatment much faster.  I believe my Road ID made a huge difference.

It is amazing I was able to communicate at all that day- it turns out I was suffering from 7 broken bones, a laceration in my right eye from my glasses, my handlebars severed my right index finger, a blood clot in my carotid artery (later caused a minor stroke and necessitated a stent), a torn brachial plexus, and had a massive hematoma in my thigh. Ten surgeries later, I'm back on the bike and won't train without my Road ID.

Update: Recently I was riding with friends when 2 of them were hit!  Despite the fact I ride with them regularly, I didn't know basic information about them, like their emergency numbers or even how to spell the last name of one of them. It took searching the internet, and making numerous phone calls before we could track down phone numbers.  I also knew my friend took medications, but had no idea what they were.  Road ID would have made the whole process so much easier.

Thanks for making a great product. This ski season, all my kids will be wearing Road IDs in case they get hurt or separated. NO ONE plans to have an accident or emergency...but with Road ID, I know I'm covered.

- Kathleen .A from Evergreen, CO