I woke up in the hospital with broken bones 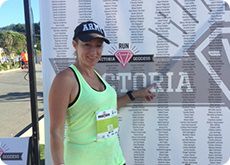 I am a Sergeant in the Canadian military, and through the course of my travels, I met a Sargent in US military. We became friends and he introduced me to the sport of cycling and Road ID. In purchasing my ID, I also installed the Road ID app on my phone. Two weeks ago, I was involved in a serious accident. I have no idea what took placeother than I woke up in a hospital the next day with broken bones, bruises, and cuts from my face to my ankles.

Although the accident was witnessed and an ambulance called, the app alerted my boyfriend via the stationary alert. My boyfriend called, and the paramedics were able to confirm my information and tell him what hospital I was heading to. He was able to alert the rest of my family and he even beat me to the hospital!

I later came to find out that my face hit the ground traveling almost 40mph, and that I hit the ground so hard my helmet broke in half. I was a mess, so thank God I was wearing my Road ID! I’m so thankful my boyfriend knew where to find me.


- Debbie .F from Courtenay, BC